The unrelenting screech from the dryer annoyed Dona Stone every time she did laundry. But so did the idea of hiring a professional for repairs.  “There has to be another way,” the Rowlett, Texas, resident told herself.  With the help of an online video and a $20 part, she repaired the dryer on her own in 45 minutes and joined the ranks of do-it-yourselfers reshaping the nation’s service economy.

Consumers facing stagnant wages and tight budgets are rethinking spending on an array of services. They are lengthening the time between haircuts, shunning movie theaters for in-home entertainment and taking over tasks once left to professionals. The shift is one reason inflation-adjusted household spending on services has grown more slowly in this economic expansion than during previous upturns.

The can-do attitude saves consumers money and gives them a sense of empowerment, but it also dings the appliance-repair industry. Spending on appliance repair collapsed an inflation-adjusted 15.7% from the housing bust in 2006 through the recession’s end in mid-2009, according to Commerce Department figures. It fell 11% more so far during the expansion.

The drop is contributing to a thinning of the ranks of repair professionals and weaker wage growth for those who remain. Market-research firm IBIS World named appliance repair as the riskiest career for 2015.

Annette Carovinci’s experience helps explain why. When her front-loading washer went on the fritz last fall, Ms. Carovinci called for an expert to visit her house in East Northport, N.Y. She waited a week for a Saturday appointment and was told it would cost $110 “just for the guy to walk in the door,” she said.

The wait allowed Ms. Carovinci to investigate online why the washer wouldn’t finish a rinse cycle or rebalance itself. She concluded the washer needed a new balancing center and ordered the part from RepairClinic.com for $23 plus $10 for quick delivery. She fixed the washer in less than four minutes.

“It is so rewarding to me that I can do this myself,” Ms. Carovinci said. “It is empowering.” 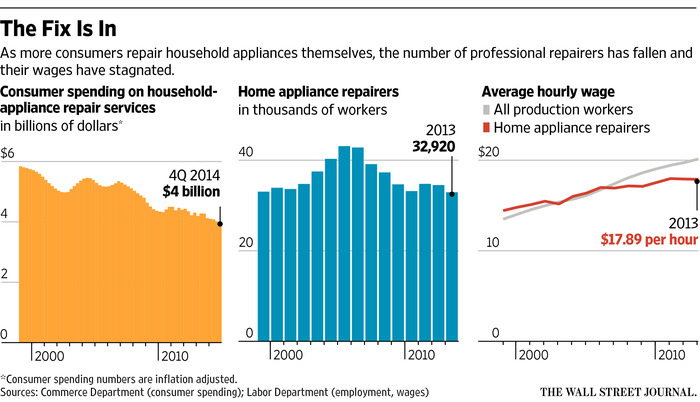 A survey by Consumer Reports magazine last year found that about a third of people whose appliances weren’t covered by warranty said they had fixed one themselves.

The cost of new appliances relative to the cost of professionally fixing them also contributes to trouble for the repair industry. Celia Kuperszmid Lehrman, deputy content editor for home and appliances at Consumer Reports, advises that the cumulative cost of repairs shouldn’t exceed half the cost of a new appliance.

Prices of major appliances—refrigerators, ovens, washers, dryers and dishwashers—have been about flat during the past decade, according to the Labor Department. But the cost of repairing household items climbed about 50% over that period. Faced with the cost difference, consumers lifted their inflation-adjusted spending on appliances close to a record high in 2014.

Meantime, the growth of online information is driving a diverse group of consumers to diagnose problems, exchange tips and order parts.

“Some people expect that the average DIYer is a middle-aged man with a tool belt,” said Jody Lamb, public-relations manager of RepairClinic.com, one of many websites offering guides to do-it-yourselfers. “The Internet has shattered that. About 30% of our customers are women and every year, that percentage grows.”

Appliance makers have responded to the DIY trend by offering guidance to consumers who want to tinker with the fridge.

“We try to anticipate what consumers might do with their appliances,” said Larry Latack, director of product safety at Whirlpool. The company includes stickers inside appliances warning users about things such as disconnecting the power before servicing or replace panels before using.

A major concern, said Mr. Latack, is consumers using the wrong part to replace a broken one. Mismatched parts could cause an appliance to overheat. Whirlpool suggests consumers call its customer-service line to discuss appliance problems.

The easier access to parts and guidance is leading to even more trouble for the old Maytag repair man. The number of professional home-appliance repairers reached a peak of 43,000 in the boom year of 2005. The number fell to just shy of 33,000 in May 2013, the most recent data available from the Labor Department.

“[Repair] business owners can no longer sit back and wait for the phone to ring,” said Paul MacDonald, executive director of the United Servicers Association. They have to embrace social media and rethink their businesses, he said.

Much like other consumer segments, income inequality comes into play when it comes to who calls a repair man. “The appliances most likely to be repaired professionally are higher-end models,” said Mr. MacDonald, such as $5,000 ovens and $10,000 refrigerators.

Repair businesses are diversifying to focus on other products and services within a home that might include water coolers, heating and cooling equipment, home-exercise equipment and garage-door openers, he said.

Ms. Stone, the Texas resident who repaired her own dryer, said the desire to spend money on her two children rather than a service call motivated her to watch online videos of squeaky dryers to determine that the glides holding her dryer drum had worn out. But if her air-conditioning system were to break down in steamy Texas, she said she would call a repairman “immediately.”